Exhaustion and Courage in Times of Triumph and Struggle! 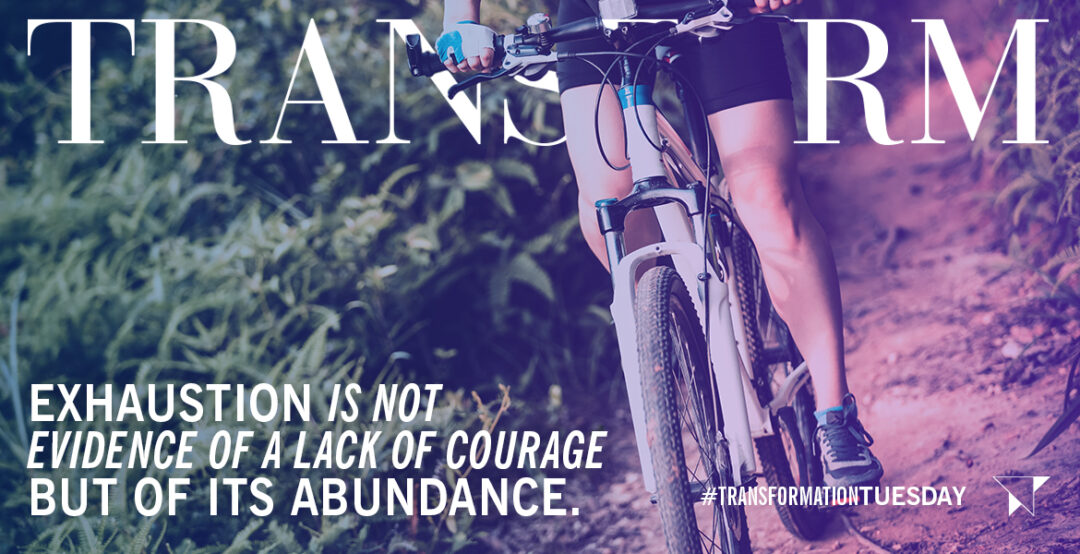 Kate Courtney, professional mountain bike racer, wrote about her experience at the Tokyo Olympics in a piece in The Washington Post titled, “What it feels like to lose at the Olympics — and how you pick yourself back up again,” on Sunday, August 8.

Kate prequalified for the 2020 Olympics and prepped one additional year for the games, putting in grueling hours of practice and mental preparation with her eye on lining up to race in Tokyo in August 2021. She writes that despite the difficult and challenging days, “the future games motivated me to continue to work through doubt and uncertainty, to believe that the future would be ripe with opportunity. In other moments, I felt trapped in a prison of expectation that I had slowly built through weeks and months and years of hoping. The pressure only grew as I waited for the chance to make it all worth it.”

She describes arriving in Tokyo surrounded by support from family, friends, and teammates. Then she says, “I fell off an emotional cliff.” She details the start of the race and the increasing awareness that her body and mind were out of sync, and after 82 minutes and 19 seconds of racing, she crossed the finish line in spot #15. While those around her sought to console her, she turned inward and against herself, scolding, chastising and blaming herself for not working hard enough, being mentally weak, etc. She writes, “Our brains are wired to fixate on the negative, and despite my best efforts to shrug off or better yet not read the comments, they felt loud, unavoidable and damaging. They provided ample fuel for the doubt and disappointment I already felt.”

She packed her bags and left for home, and that gave her some space to process her Olympic experience. The first thing she realized was that she was not alone. Simone Biles had withdrawn from Olympic events and Naomi Osaka from the French Open. Both spoke of the mental toll that elite athletes endure and the struggles to maintain one’s mental health. She writes that “few people will ever understand what it feels like to win a gold medal, but we can all relate to the feeling of struggling to accomplish hard things or get through a rough patch where nothing seems to go our way.”

I don’t know about you, but I can certainly relate to tough times in my life where I felt I’d never make it through sane or alive, and yet I did, and I came out stronger on the other side. Kate says that these moments call forth and build courage in us, yet you might be surprised how she defines courage. She quotes the poet, David Whyte, who in his book, Consolations, writes, “Courage is a measure of our heartfelt participation with life.” After a time of reflection, Kate realizes that “the depth of my heartbreak is not just evidence of my failure. It is evidence of my courage; of the lengths I was willing to go to participate fully and completely in my pursuit of this goal.”

She adds, “but courage is exhausting. And I don’t think Olympic athletes are the only ones feeling that exhaustion. In the past year, we have all been forced to show courage in waking up each day to face a world rapidly shifting beneath our feet. It can be exhausting to continue to give your best effort and remain hopeful in the face of overwhelming uncertainty, doubt and loss.” Yet she concludes the quote above with, “Exhaustion is not evidence of a lack of courage but of its abundance. To deny the struggle is to deny the very thing that allows us to triumph in the end.”

Our work with business owners in these last 18 months has been a privilege. Both Mary Anne and I have been a witness to the courage and total exhaustion of the business owners and leaders we have worked with over this time. On the outside, they have had to appear to be strong, focused, and resilient, dealing with every curve ball that has come their way. Yet on the inside, they too have had fears, doubts, frustrations, and yes, even exhaustion that needed to be voiced to someone who wouldn’t judge, be critical of them, or see them as weak. Quite to the contrary, we saw them demonstrating courage in facing into these uncertain times with self-transparency, compassion, sheer determination, and a steady presence to keep their businesses afloat and employees safe, which has inspired and continues to inspire us daily. That is not to say that they didn’t have moments where they lost it or showed up in less than ideal ways, but their ability to self-correct, apologize, and keep moving forward made all the difference.

We ask you, our readers, to take some time to connect in with yourselves and see if these two words — exhaustion and courage — resonate for where you have been or are these days? Do you need someone to help you sort this out or see beyond the exhaustion you may feel? Or might you need someone to help you recognize how your courage can sustain you through these next days ahead? Wherever you are, we are here as a resource, and only one call away!