A recent article in Huffington Post tackled this question, and while the article dealt with CEOs, I’d like to expand the question to include leaders, sales and business professionals and managers. Why would anyone not want coaching? Let’s look at some research results shared in this article for some insights.

Stephen Miles, CEO of the Miles Group, who partnered with Stanford on a recent study on this topic, pointed out that the CEOs in their study viewed “coaching as somehow ‘remedial’ as opposed to something that enhances high performance, similar to how an elite athlete uses a coach.”  Moreover, CEOs said they’re most interested in such skills as conflict management and communication. Yet they put the need for compassion, relationship and persuasion skills far down on their list. They think of the latter as “soft skills,” ancillary at best. These results suggest that a perception issue about coaching may be at the root of why CEOs, or anyone, might not work with a coach. The article suggests that coaching companies don’t do a very good job of educating their audience about the benefits of coaching. This conclusion is a bit too simple in my view.

Our experience suggests that CEOs, leaders, sales and business professionals and managers don’t hire coaches because they believe they don’t need them. They are happy with the results they are getting, satisfied with the skills they have and content with their life as it is. Or they are do-it-yourselfers – they believe they can develop the skills they need on their own, can get better results by working harder, or can figure out for themselves how to turn around what is broken or not working at all. Or they believe that engaging a coach is a sign of weakness rather than a strength.

“the mean Return on Investment in coaching was 7 times the initial investment, and over a quarter of coaching clients reported a stunning ROI of 10 to 49 times the cost.”

If you fit into any of these categories, you are not alone; however, you might consider what you are missing by not working with a coach. A recent study on individual executive coaching performed by PriceWaterhouseCoopers and the Association Resource Center found that “the mean Return on Investment in coaching was 7 times the initial investment, and over a quarter of coaching clients reported a stunning ROI of 10 to 49 times the cost.” Matt Symonds who reported on this survey in Forbes Magazine asks, “What other investments in professional development do you know of that provide an average client-reported ROI of somewhere between 340-700%?”

While the ROIs in this study blow away those reported in an earlier 4-year Fortune 1000 study of 100+ CEOs and Professionals who are compensated over $100K annually, the Fortune 1000 study also reported specific tangible and intangible benefits to working with a coach. These benefits are highlighted by the two graphs below: 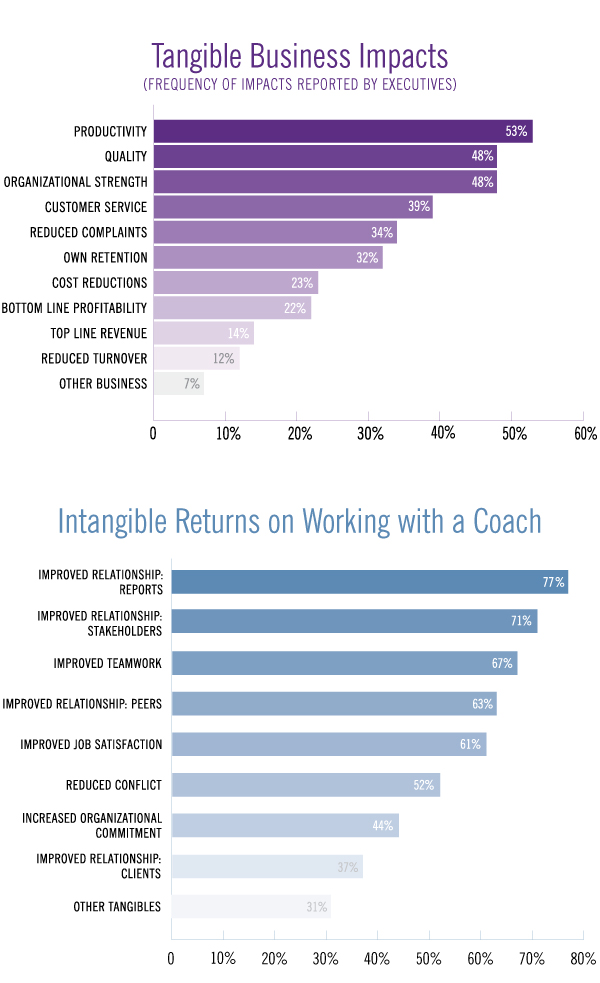 So, no pressure, do you want 6 times or 350-700% ROI on your investment in coaching? What are you waiting for?